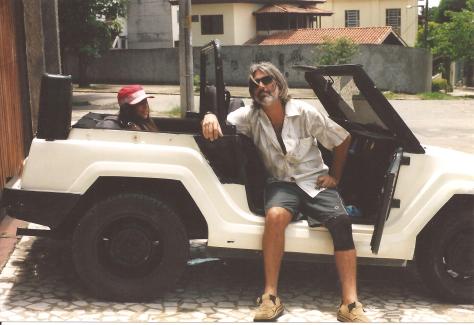 Thunder rolled over the favellas, and dogs went crazed.
The sky was a thick paste of grey, and the wind spoke of rain.

She sat on the steps of her boat, her island of sanity in a
world gone crazy.  This man was sane.  How rare…

She explored his face.  He’d blown half of it apart in a diving accident,
a pressurized problem upon resurfacing, some sort of explosion,
something about oxygen that I can’t recall now.
He’s said his left eye was hanging down, and when he closed
the right one, he could see his feet….

They put it back together, one of the best surgeons ever did the work,
and now only a scar across the left cheek, from above the bridge
of the nose to down below his cheekbone.  A miracle really.

She could see that the damage had extended into the jaw, for
the teeth were no longer perfectly symmetrical, yet still and all,
he was a handsome devil, with some of the edges rounded out.
The Perfect was gone forever, but enough was true North to believe.

This man, punching himself silly, and still he demands the Truth.

Before I’d come, he’d said his daughter V would be there the
28th Jan, and go home the 9th of Feb, the day before I arrived.
“Not for your birthday?” I’d asked.
“No,” he said, “I don’ wan’ to get her involved right now,” and that
“if someone ends up in my life, then she will…”

But he said he had never had her with another woman, that her
mother had been pretty loose about men, and he will not subject
her to that.
I did respect that, and admit I’d been wondering how all that
would work… whenever he mentioned the mother, great tension
built in the air, the tone of the voice changed, and unpleasant
adjectives  inserted themselves.

It was obvious there were many unresolved issues between them.
I remember thinking that part of him was still in love with this
likely beautiful blonde that he had been so crazy about, the one
who had given him a third chance at really being a father, present
and deeply involved this time……for surely it is true….
The opposite of love is not hate… it’s apathy.

So now, suddenly after only three days, he tells me he wants V
to come here for his birthday, and stay a few days.
His way of telling me, I guess, that what he feels is real.
I take this to be a good sign.

So we go to the house of her mother in Sao Paolo… a ride on a long
long bridge across the bay to Rio’s twin city, newer and more
commercial, and certainly not as picturesque.

Actually, when Piney had visited Brasil for some business there,
she stayed in Sao Paolo.
“Ha!”  he exclaimed. ” An’ she thinks she’s seen Brasil?
No, I don’ thin’ so!”  and his laughter exploded through the phone.
“Oh that’s funny.”

So the daughter hops into “Pai’s” car…. a little jeep like thing called
a Gervel, produced in Brasil by Volkswagon.
Cute, sporty, good mileage……top on, top off, quite fun really.

She eyes me suspiciously, while simultaneously smiling and enduring introductions.   Since I don’t actually speak Portuguese, they chatter
away, and I do my best to just take it all in.

She has his huge dark eyes, brown skin, long thick hair.   Her mother
is the blue eyed blonde, and I watch to see where she fits in the mix.

Very self possessed, confident, dramatic, expressive and smart.
And obviously in love with her Pai.
She has his wild, and something else…
Something seductive and coy,  with great feminine wiles.

Oh this is going to be interesting….