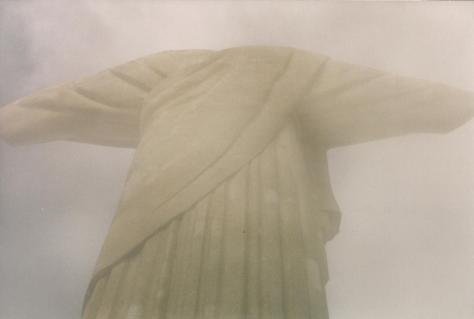 A visit to Rio would not be complete without seeing a few
of the tourist spots.  Rio itself is a year’s viewing, but since
that’s more than I had, Alcir saw to it that I enjoyed that
Huge Guanabara Bay, 15 x 16 Miles, with scores of islands,
and the ferrys going to what they call Downtown Rio, and
what I called Mainland Rio…

Alcir had a theory that the Bay is a splash up from a giant
volcano… tossing up all those lumps that are so familiar
to us in pictures of Rio… a geological phenomenon that would
seem to be somewhat repeated on the NorCal Coast where I
used to live… although certainly not as massive or spectacular.

Corcovado is one of those hills behind and above Rio, and
back in 1931, they built the Concrete Christ, Cristo Redentor,
and at nearly 100 feet, the mass of it alone is rather awesome.
The day we visited it, his head was in the clouds.

Researching it, it sits on a base that adds 30 ft to the height,
but still it’s not as large as the Statue of Liberty, and dozens of
Jesuses and Buddhas and Quan Yins all over the world.
Still, in the presence of it, at the feet of it, and realizing the bulk
the mass, the scale…. quite wonderful.

A little side note:  it was recently voted to be one of the
New Seven Wonders of the World…

One of the other ‘Musts’ was Pao d’Azucar, what we call in the
States ‘Sugar Loaf’, and the whole experience of traveling on the
trams along steel cables, to the top of the largest of those Lumps
in the Bay… well that’s another day and another story.