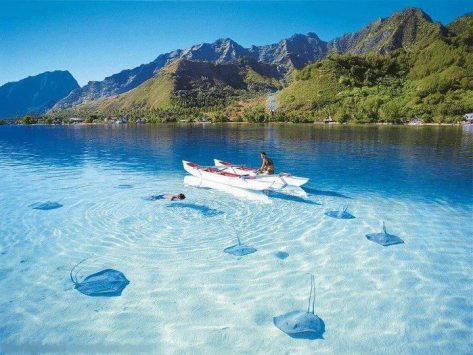 Just this morning,  while waking to cups of strong steaming coffee
colored of cream, for some reason I remembered a little tale that
Alcir told me many years ago…

This was in the early days of our story, back in 1987 when he was
diving for urchins in the little Point Arena town in Northern California.

He’d come west from Lake Tahoe, where he was living, hearing
about the cash and thrills of that gold rush time…
It was a free-for-all, no limits, with ice trucks standing by to rush
the fresh treasure off to the Japanese buyers, who have deep
passion for that succulent, creamy delight.

He could earn a great deal of money any day he dove…
I remember one day he said he got over $1000… that was the day
he came in, surfing the top of that tan van as it drove into my
driveway, that familiar broad grin of his painting his face.

He often mesmerized me with his wild tales of adventure, and
this one became one of my favorites.  It wasn’t until this morning,
gazing at the clear blues of the BoraBora lagoons, that suddenly
this little story floated up and surfaced in my mind.

When he fled from Brazil, back in the late seventies, it was because
there was a price on his head.
He had been robbing banks “to finance the Revolution”, he told me…
“An then a cople of peeple got Keeeeled…. An I had to Leeef”…

His grandfather gave him a boat, which according to legend, he
took around the Horn, and escaped before they could throw him
in jail and likely kill him.
He was 19 or 20 then.

He landed in Bora Bora, and stayed there for a year, as I recall.

“At first, they deedn’t like me…. I spoke French, an they
Hated the French…

“They stayed away.  I lived on the beach an dived, an ate feesh….

“After a while, they figured out I was a cool Brasilian, an then
they began bringing their girls to me…
“On Sunday mornings, there would be a knock at my door….
…an there would be a woman with a beautiful young girl…

“What could I doo?” … a sly smile joining his shining eyes…
”I could not Insult them……

“I theenk I haf to go back to Bora Bora someday …
….an veesit my cheeldren…”