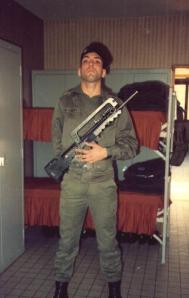 I found this Resume, while searching for him in 2004
It was written in Portuguese, and robot translated…

“Been born on 14/02/1958, former Rio de Janeiro pupil of the
Collegio Pedro II, former urban guerilla during periodo of the
dictatorship, exiled em 1979, having lived in 5 paises, and
transited by others the 43 in all continents.

Having worked as Fishing of Ouricos of Mar (Professional Diver)
of the coast north of the State of California.
He ties the Alaska, where I lived per 4 years having worked
there tambien as Fishing of King Crab, that and considered the
profession most dangerous of the world,
And having served per 5 years in the French Foreign Legion, in
the Duzieme Regiment  Etrangere de Parachoutists of where I
gave low with apos metals  of bravery to have passed for tres
great conflicts, as:
Chad, Djbouty, and finally in the Gulf War Desert Storm.
Eximio sailor, having crossed the horn four times, two times
being aground.

The unica reason pra that I bring everything this tone, and so
that can subsidize what I believe gives a success, my book of
memories that would like to see published, as much how much
the remain of my tedious workmanship would literaria.
None ties the moment, but I wait to revert this picture how
much before.

In the truth, I have dues letters and an article on fishes of
ouricos of the sea, and the Exon Valdez, published in the
periodical San Francisco Chronical.
I Wait Contacts…”

The story that Alcir told me, of how he discovered Who he was,
discovered that he was First and Foremost a loner and a diver…
is actually rather heartbreaking, yet  beautiful at the same time.

“My inner self started when I was 6 years old, and I was drowning
in high seas.   My father trew me in the wader, he watch me as
I tried to stay up, my arms an’ legs grabbing.

I wen’ down, and didn’t come up.  I Loved it.  I went down to the
bottom, and sat in the mud for a long time…. maybe four minutes.
Suddenly I appeared up, with a big smile, and I discovered my life.
All I wanted was to dive.
I discovered who I was…. a loner and a diver. I didn’t need anyone
else to help me, or to tell me who I was.
And that is when I started fighting it.
They…my parents… could never understand why I refused to use
my intelligence, which they said I had.
Two times I broke the world record for deep sea diving.
I went over 75 meters down…
I don’t care that it was not recorded.  I know who I am. ”

I remember he told me once that he went down … i don’t know…
200 meters or something crazy.  When he came back up, the
other guys didn’t believe that he’d gone down all the way to
the sea floor, so he went back down, following the anchor chain,
and brought up some sand from the bottom, just to prove
that he did.  This was a Free Dive.

He claimed he could stay down for many minutes… four or five…
and frankly I doubted his story.  I mean, impossible, right?
Then much later, I saw some nature program, where it talked
about how some people have this rare genetic ability …
and can, indeed, hold their breath for many minutes, and also
endure deep dives.  I had no idea.

“All I wan’ to do is make myself happy.  Society wans people who
wan’ to impress society.  I’m not a monkey… I’m not a circus animal,
that lives to amuse people… I jus’ wanna live my life.”

He got a medal for bravery.  It was in Desert Storm I think.
He carried a buddy on his back to safety, but he was already dead.

“He took 6 or 7 bullets for me”, he told me “but he was already dead.
Actually, he shielded me, but that was not why I carried him.
I never thought of that, I only thought of getting him out of there”

Another war story in Desert Storm… he was sleeping in his tent,
and in the middle of the night, he got up to take a piss… he heard
an explosion.
He looked back, and NO TENT…

“If You are…imagine me?”  His eyes grew dark and clouded over.
Still, his gaze was intent, as he looked deeply into me, knowing
he was sharing things hidden so deeply within his heart.

“When I am at war, I do not see them as human beings…no…
as a target; I have a perfect concept that they feel the same for me.”

He told me so many things about himself that night.  My heart is
heavy with the realizations of his youthful pain.  He said at six,
his mother told him he wouldn’t live til he was eight, and every
year she renewed her predictions.

He was always in trouble, at home, at school.  And then came the
beatings.
Now today, I realize that he is ADHD.  And these people are usually
extremely intelligent, and in those days they were completely
misunderstood.

And the father story… a life of beatings.  With the belt, with a
piece of wood, with whatever he had in his hand at the time….
…even kicking him, and when he fell to the ground and curled up
in a ball, well then he’d kick him some more.
They both took great pleasure in punishing him in front of others.
Strange, how such terrible deep scarring can direct someone to
such drive, such accomplishment.
I’ve felt for some time that all of this was about proving himself
as a man.  But not to be loved, not to be liked by others.
And he was never accepted or shown love by either parent.

No, it was something deeper.  Proving to Himself that he was
what he Knew himself to be……  Extraordinary.

The phone rang.  Busy making dinner, Lily answered for me, while I obliviously continued my quest for dinner.

“Mom!  some lady’s on the phone, and she says she has a Collect Call from Brasil…”…she shrugged…

Oh great, I thought.  Some friend of mine is messing with me… they’re so sick of hearing about Mr Brasil, and now they’re giving me grief….

“Uh………yeeessss….. I slowly pulled from my mouth, while brain went into permafreeze…. silent moments passed…..

I took a deep breath, and in my confusion, suddenly everything stopped.  I had a house guest… one of my absolute favorite friends, playmates, collaborator,  D I shall call him, and he and his buddy were up from the Bay Area to find large driftwood for his new store in the city… and dinner, D, Lily, time…. all became temporarily irrelevant.

“Yessss..???” which ended in a question, because there was no where else for me to go with this.  I hadn’t seen or heard from him in Two years, and frankly, knowing him as I did, I found myself at times wondering if he was even alive.

Oddly enough, I had just gotten a Card back, return to sender, no such animal, that I had sent to Tahoe weeks ago, in desperation.  My mind had been plagued with terrible wondering, I couldn’t stop thinking of him, and I had written something simple, direct inside:
“Come Back….. At Least let me know you are Alive”… It had a tender print of Isis holding a wounded Osiris on the front.  I still have it.
Weeks had passed, and then there it was in the mail…  oh no… I may never know…
That was but Days ago… and Now…?  how can this be??  I excused myself to the pantry.  I needed isolation, focus, clarity, a brain please.   Shake brain like Snow Globe…. let dust settle….

“Where Are you?” I semi stammered.

“In Brasil… tonight there hass been many celebrations, with many friends and family from long ago …I Had to come back.  Eeeets my contree…” he trailed off.

Long ago, he had left Brasil, run actually, from an inevitable jail sentence, perhaps death… and his Grandfather had given him money… he’d bought a 30 foot boat, and sailed away, alone, around the Horn all by himself… he was maybe 20…
“I was a Revolutionary.  I robbed banks to finance the Revolution.  An’ then a coople of peeeple got Keeeeled, an I had to leeeef.”
That was over ten years ago, ten years he’d spent in Norway, Hawaii, and finally,  and mostly, the West Coast.  He’d acclimated quickly, Loved it.

“I waz een the French Foreign Legion” he told me.   OK… another brain freeze.

“oh…. like walking for twenty miles with a hundred pounds on yer back, an eeef you fall down, they Keeeek you…”

“How did you get out?” I asked, for I’d seen enough about the Legion to know that once you join, you give up all rights, all contracts, all everything, for Seven Years.  How could this man…?”

“Oh… they deedn’t know whaat too doo weeth me for a while… All three of them had mee in a rooom for a few hours…”  He referred to his double citizenship… Brasil, US (he’d been born in Honolulu while his parents were traveling) and I guess France and the Legion.   I fantasized him escaping, running through the jungle, dodging bullets… big grin on his face…

“I Love You” he breathed softly…

“What..?” I squeeked, breath gone.  He’d never said that, ever.
Once I had said that to him, in the midst of love, and he busted out
“Nooooo, don’ sayee thaaat.   Why, because we have good orgasms?  Nooo…don’ saayee thaat.”  It was like an allergic reaction…

“Could you say that again please…Words, I want to hear words…” I coughed.

We stood there… half a world apart… and it was alive, still alive.  I didn’t care how much it was costing, how long, nothing…

“I’m sorry for calling collect,” he said…”I’ll make it up to you when I see you.”
My knees went weak.  By now I was lying on the bare floor of that narrow pantry, staring up unseeing, at shelves of canned beans and pasta.