We’re at the aeroporto… we cling to eachother like frightened
children…. or frightened old people…..
we’re too quiet to be children…

I can only hold onto him, hold his hands, touch his borders,
until the very last minute, knowing full well that time just keeps
moving on, and soon all this will be gone…the now of now
will soon be the now of the future, evaporated
but for foggy memories.

He sits beside me, and we are quiet together, our last moments
before the long distance once again pulls us to someplace else.
I lay my head against his maleness, holding to his arm,
head on his shoulder, my hands absorbing all I can of him.
He feels solid, grounded, calm, sad and resolved.
He says nothing… there is nothing to say.

I cannot hold the tears that fall down my face, and onto our
mutual hands…… and he looks long at me…

“Oh…I think thees separation ees going to be harder on
you than me…..”
He trails off …… I hold tight.

He takes my journal, borrows my pen, and writes
one last message to take home …

I remember turning to him for one last look, after I walked away,
before I moved into customs, and readied myself for the long trip home…

I may not see his face again for a long time… and for all that life offers..
….and for the way he is… it could be never.

The old panic buttons send their blaring sirens off into my nervous
system, for the so-many-times he’d left before, all of it coming up
like a slide show carousel on the dark wall of my brainscape.

I remember boarding the plane, and asking the assistant to please
bring me some kleenex…
“I am leaving my fiancee,” I tell her…” and I know I’m going to cry…”

And I did.  I cried as the wheels left the runway, as the plane banked
for the last time over that city, over that bay, and away from that
magical place…my magical place…..until I could no longer see
that city, that bay, that coastline, or Brasil at all.

And then I wiped my eyes, sat up a bit, pulled out my book and
began the long journey home.

One of the more wonderful things to do, at least from
my point of view, was to go on the ferry and into the
mainland city, the old city that has held such fascination
for so many millenia.
Rio was the destination for the rich and famous, Hollywood,
and the glamorous.  It was also the place to run away to, for
its vastness made it possible to hide forever, from whatever
or whomever you were running. 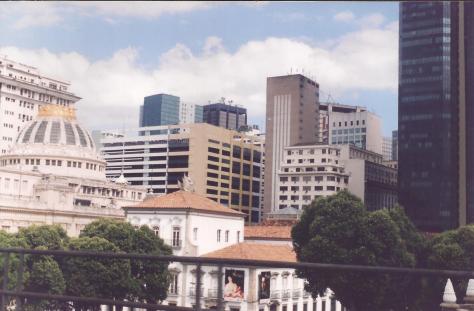 Traveling through, it is such an unimaginable combination
of centuries, styles and cultures…
My camera’s eye was enthralled with the contrasts and combos,
the most incomprehensible next door neighbors created by
circumstance and availability.
I share some photos, because Words do not suffice.

Rio just goes on and on.  The sidewalks are made of broken
marble from older buildings from the past…puzzled together
to create artful walkways, each street with its own pattern. 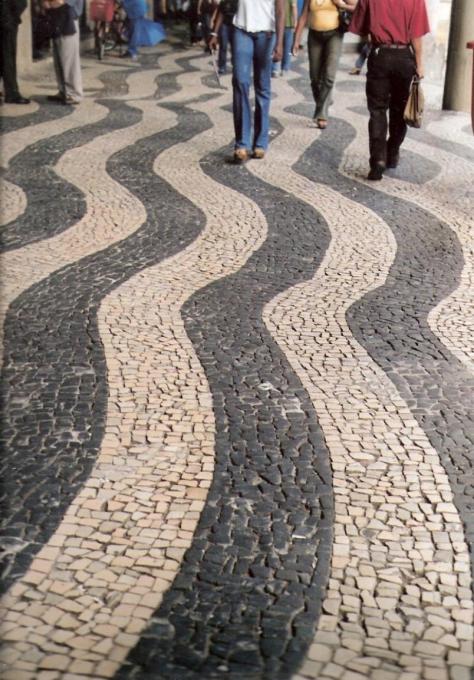 The beaches themselves, lined with deco lighting and the
eternal sidewalk strolls, enabled by parks and grassy spreads,
and that white white sand, going on for miles…..
Copacabana…. Ipanema…. who does not feel a little thrill,
at the sound of these almost mythical places…
Nothing creates sand like that, but a million years…
This I know from Hawaiian times.

There, as the sea bed’s volcanic activity keeps on spewing, the
land mass moves over it, traveling NorthWest, and one by one
the islands were formed in order.
This is a beautiful example of geological creation of land mass
that is a clock, a window on the timing of movements
and how it all works.

Kauai is the oldest, and thus, those immaculate white sand
beaches that are indicative of long time coming…muito tempo…

The Big Island, at the other end of the chain, is relatively new,
and mostly you see black sand beaches, and lots of lava rock,
while the volcanic activity is still fresh…. the irridescent lava beds
lying like moon landscapes out before you…as each forming island
straddles the upwelling energies.
Actually off the south east end, there is yet another island forming
under the ocean, while the islands beyond Kauai on the far northwest
end have already sunk, only coral atolls marking their perimeters,
the memory of islands eons ago.

Thus… what I am trying to say, to express, is the Ancient
Quality of this so Ancient a Port…Bay…Islands…of Rio de Janeiro.
This place has basically been there forever… forming, rounding,
sheltering, protecting, like a huge womb, even in its shape…
and being the nursery for the sea for more eons than we
can even conceive.

And so did I…. and it helps to see a new country with a Native…
Obrigada……!
Ate amanha meu amor………. amanha….