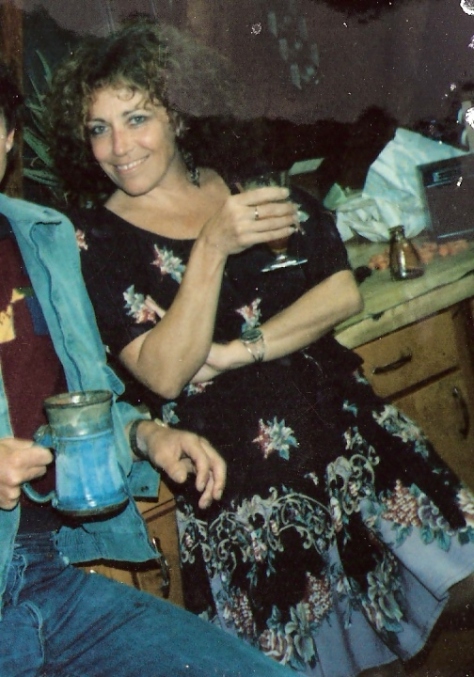 It’s 1986, and I’m having margaritas with Steven, the one who brought Alcir home with him and a frozen chicken. I cropped this one to send to Alcir, because he hated seeing me with anyone else…. even Steven.   I was 43… he was 33…. at least that’s what he Told me… later I found out he was 29.

So, a while back, I was exploring the whole issue of age, as it relates to women, and relationships in general.  As you likely have heard more than once, I have ‘dated’ younger men for long long time now, and have always felt more appropriately matched with guys who are not only cuter and more fun, but just endowed with more energy, and are in general more flexible and hip.

I know…. Men my age have commented that they “know why you like younger guys”, and well, yes, they are healthier and more virile, more spontaneous in lots of enjoyable ways, but believe it or not that’s not actually the primary reason.  It helps, but the number one reason is…. They challenge me.  They lighten me up, make me laugh, they are Fun…. and frequently very good dancers!  They are just a little ahead of me in some ways, in those ways that the youngers have, so in some ways they are in the lead.  Of course I have my wisdom and experience, and although sometimes that can be a big heavy drag, in general the balances have been great.

Pan down a few years.  Back in 2005-2006, I spent time in Brasil, living with this fellow who I had met in 1987….i know, crazy huh?  At that time, it was the Gold Rush on the coast for Urchins.  People told me Urchin Divers were the wildest most dare devil guys, and so I wanted to meet one.  This one was brought to my house by a friend, and the rest is a book.

Well he was wild, and I was crazy, and somehow it reappeared in my life all these years later, thanks to the internet (there we go again), and off I went to Brasil, some place I had wanted to see for a long long time.  And not Just because of Alcir, who was undeniably The most outrageous, crazy, brilliant, funny and gorgeous wild man, but also because the spirit of those people as expressed in their varied music, as well as Carnaval…have you Ever Really seen Brasilian Carnaval?  It will Melt your Mind….  Brasilians are wild, primal, animal, funny… they dance with abandonment, and live life to its fullest.

Well Brasil just captured my heart and soul.  And so as we frequently do, I created this opportunity to see the place with a native, and hang with this devastating fellow once again.   Lucky for me, he had fallen for me big time too, as the chemistry was instant and insane.

Oh, just the accent, his voice on the phone, and I was on my way.  If you combine the sexy suave of Antonio Banderos with the dark depth of edginess of Benicio del Toro, and throw in some warm and charming Javier Bardem, embellished with that Brasilian accent, which is likely the sexiest language on the planet, well, you have some idea of what I was dealing with.  Really….            It was bad.

So after the two years of back and forth, fortunes on the phone, ups and downs nonstop… did I mention he was bi polar, ADHD with a gigantic IQ, a heavy drinker heading towards alcoholism, with a history of being a Revolutionary in the seventies, sailing around the horn by himself on a 30 ft boat to escape prison, because of his Revolutionary acts, and…. Joining the French Foreign Legion after we’d first met, and parted back in the eighties… no, Really…..

He was a member of the most exclusive group in the Legion,  2nd Regiment, the High Altitude Parachutists…  they drop in so high they wear oxygen masks…. And perform secret ops missions.  He told me once that one of their missions was for his group of six to drop in on Baghdad, and take out someone very high up.  They knew at that moment, exactly where he was, and they got within 200 yards of him…. when the mission was called off.   Who did he almost kill?  Because he would have been the one to finalize… he was known for the perfect shot.  It was Saddam Hussein.  No, Really….  He was very disappointed.

So I digress.  He was bigger than life, completely brilliant and completely mad.  I came home, and since then have not been with anyone.  I just couldn’t do the Alcir thing anymore, as he was a full time job.  Lots of excitement, lots of laughs, and lots of Tsouris.  That’s Yiddish for Trouble.  Unbelievable what he could get himself into.      One night he was out for maybe 12 hours…. This was a regular occurance, his leaving for hours and leaving me locked in at home.  “I’ll be back”  he’d say.  Well, it is Rio, and I have blue eyes and don’t speak Portuguese much.  But, it’s a man’s world there, and they all go to the bars and drink.  A Lot.

So one night at 2 in the morning, he’s scratching at the door, drunk off his ass….. it’s summer, and the barred windows are open, and I yell something angry at him while he’s being winsome and pitiful…all six foot kick ass of him, and whining “noooo…. Baaaby… noooo…. Let me eeeenn….. noooo, reeeeeally…nooo… you don understan….. I got run over by a busss…..  I called him Desi sometimes…..”Luuucyyyyy… i’m Hooooome…”

All I could do was shake my head, starting to laugh because he was sooo funny, let him in of course, and listen while he tells me the whole story … the car broke down…. He borrowed a bike….. and somehow a bus knocked over the bike with him on it and, strattling him, went all the way over him.

He had some bangs and bruises for a week…. the borrowed bike was toast.

This sort of thing happened all the time.  He loved it.  He craved it.   What can you do after the Legion?

Women called him all the time.  Angry Brasilian women can be very scarey….  “Haalllooo?  Eeees Alceeeerrr…”(that rrr has a sound at the end like you’re clearing your throat of phlem… and she did it with angry emphasis)  “…there?“

He used to tell me that I’d Never find anyone like him.  Oh yes, I know, I’d say.

So what’s this all to do with now?   Well, somehow I want to get back on the train, and can’t.  I have somehow passed over the line here, and younger men, at least so far, seem to have moved on to younger women, not older.

It was funny, but I was enjoying the whole Demi and Ashton thing for a long time….

See?  I’d say to myself.  It Can work…. Susan Sarandon worked it out with Tim Robbins, and it lasted a long time, even had kids.  And there have been others.  How bout how Yoko made John get his shit together?  To all of our benefit… They had at least a 10 year spread.  They each brought something different to the table that the other one needed.   Granted they are the exception, but they do exist.

So now the great Demi and Ashton are history.  And Why?  Look at her… she’s great.  She’s thin and beautiful, ageless, works on herself, bought him acting lessons, and he made her happy…. They laughed a lot, and looked great together…

What happened?  He grew into his own, and then…. The Options hit.  He’s now in his prime, the girls must be Throwing themselves at him, he has this new TV contract, and may actually be taken seriously at last… and I bet he has More Options than he can deal with.

I read an article a while back and it really illustrates the Cultural Bias that has existed, and still exists within our world.  If you top that with what they are calling statistics, well seems that the older men get, they younger they go for…. Their Options increase, and well, lots of women are looking for someone to take care of them, adore them, give them stability after being with crazy young men, and goodness knows there are tons of older guys out there, tossed out of marriages everywhere.

That’s what my Brasilian did.  After years of telling me we were made for eachother, that he would be alone if I left him, that I needed to stay and help him get it together…. What did he do within oh, maybe 3 months?  He got together with a very young, blonde and beautiful Norweigan woman who was part of the crew of the 300 foot ship he was Captaining….. and they left for Norway, where I’m sure she was rich, and certainly madly in love with this most charming, disarming man.  A year later he was writing sad poetry ….. Ah, but I digress once again….

This site I was on for 6 months…. Full of sad and lonely older men.   Those considerably older men were all over me… I really believe men of that generation think that is The Way it’s Supposed to be…. No matter what their condition is in this moment.

I don’t think they Think they are looking for someone to take care of them, but in the end that is how it ends up.  And there were more interesting ones, ones that still looked like they were healthy and interesting fellows, but as I discovered, they weren’t interested in older women, even ones that were still healthy and attractive….like me?  They were looking for younger and younger ones, as time went by for them.  Many of them will start over with new families, and then kick it, and those young wives will be set for life.

One of the statistics noted that these types of marriages didn’t end a lot in divorce…. Well?  Likely that’s because the guy died… and they even noted that near the end of the article that I angrily analyzed.

Unfortunately for these fabulous women in our world, the ones who’ve taken care of themselves, their children and their husbands while they all were growing up… while he tested out his appeal at the office or the club…. While he engrossed himself mindlessly in his work or obsessions… ignoring family, love life and learning to relate…. She was there doing the chick stuff, and possibly even earning money too, as I did for both my marriages…. So what happens when she’s had enough, and kicks his sorry ass out?

Just like Ashton, he moves out, and into Options that he will have til he dies.

Men as they age, get “Distinguished”.  They are more stable, the testosterone is diminishing, they become more tender, full of regret at the things they did and didn’t do while they were busy being boys, and start anew, each decade going for younger and younger girls.

Next time, I’ll share some of those statistics with you, and also what my opinion is of just Why this is.  Ah yes, it’s an interesting world…. Don’t you just Love that word?